So you want to become an iOS developer, but you don’t know how? No problem, in this post we will discuss how to do it.

Step 1: Make sure you are passionate about iOS development

I think this is the most important aspect. You cannot become great in an area without being passionate about it.

Of course it’s also possible to become an iOS developer without any passion for it. But it will be very difficult and there will not be a lot of fun. Some things are just very difficult and hard to learn because mobile development is a very difficult area of software engineering. People tend to think that app development is not a big deal, but that’s not true. Mobile apps have to run in a very difficult environment. Compared to normal computers all resources are very limited: CPU performance, memory, internet connectivity and battery life. But on the other hand users expect apps to be very fancy and powerful. So it is indeed very hard to become an iOS developer – and even harder if you don’t have enough of passion for it.

Oh and since you are very passionate about that topic you have of course a Mac – without a Mac you are not able to develop native iOS apps.

By the way: It is completely okay to focus on Swift only at the beginning! Later you should also learn Objective-C because a lot of existing apps, libraries and resources are written in Objective-C and you should be able to understand all of that stuff. But the main language for an iOS developer should be Swift. I wrote a blog post about that topic.

Then, you should watch this video course: Developing iOS 8 Apps with Swift. It is an lecture from Standford University and it is very good. Unfortunately it is based on iOS 8, so some things are not up-to-date, especially Swift 2 is missing. However, the course is so good that this downside is acceptable.

You could also take a look at my Swift tutorial on this blog. It is a very basic one and a good starting point for new developers.

After this you should have already a very good understanding about the basics of iOS development. One warning: There will be a lot of things that you will not understand immediately. That’s completely normal and don’t get depressed because of that! It is absolutely ok to skip certain things at the beginning. You can get back to these things later on. 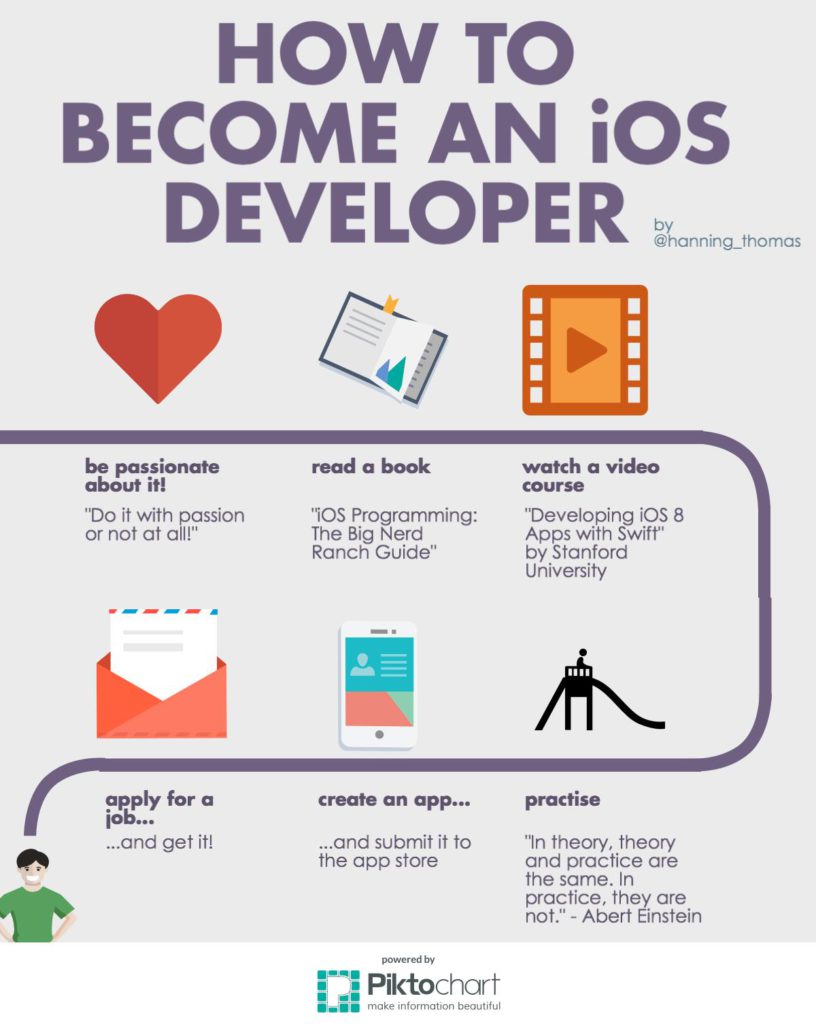 Well, all those things in Step 2 are just theory. And of course theory is very important. But it’s just one step in the learning process. The most important step in the learning process is practice. So it’s not enough to read a book and to watch a video course. You have to sit in front of your Mac and try it out for yourself! After every chapter of the book and after every lecture of the video course you have to open Xcode and do it for yourself. If you are not doing this, the time is just wasted.

This step is very crucial. After you have learned all the basic stuff, you have to build an iOS app – your own project!

First, you have to decide what kind of App you want to build. It doesn’t matter whether there are already a lot of similar apps out there or not. The goal is not to become a millionaire but to build an iOS app. So it could be just a calculator or a todo list – it doesn’t matter.

After you have decided what kind of iOS app you want to build, you have to do some research. Install apps that are similar. Use them and ask yourself the following questions: “What do I like about these apps?”, “What do I not like?” and “What could be done better?”. Mobile app development is not just about programming, it is about building a product that gives your users some kind of value. It must feel good and it must look good.

So with this impressions try to design your app. Take a piece of paper and sketch your app. How many screens does the app have? How do they look like? If you want to make a good iOS app, this is a very important step. So every iOS developer should train this skill.

Then you can start to develop the app. And you will see that a lot of things does not work out as you have expected. But that doesn’t matter because it is about learning, isn’t it? The next step is to put the app into the iOS app store. Apple’s review process takes about a week, so you will be very nervous in that time. But after the app is released, you will be very proud.

Step 5: Apply for a job as an iOS developer

Now it’s a good time to apply for a job. You have learned the basics and you have published an app in the app store. Perfect! So look for a position as an iOS developer, for example on monster.com. There’s a huge demand for iOS developers, so you could have a good chance for getting a good position. There is a good post about the applying process on raywenderlich.com.

Now you have learned all the basics, you are an iOS developer and you have published your very first iOS app. But that’s just the beginning. There’s so much more to learn! I think it is a very good idea to follow some blogs, podcasts and newsletters. A lot of things are changing in iOS development all the time and as an iOS developer you have to stay up-to-date on it. Here’s a list of very good resources for iOS developers.