It doesn’t matter how much you love your work and how passionated you are about it, at some point you will face a temporary loss of motivation. Most of the times, this is due to the so-called “Wall Of Success”.

First of all, there is good news: This is completely normal and there is something like a general pattern. I found this pattern in the book “Soft Skills: The software developer’s life manual“ by John Sonmez which is a terrific book. Every developer should read it. A similar concept can be found in the book “The Dip” by Seth Godin.

Normally when we start something new we are very exited and at the beginning we are doing almost too much. This holds true for all kinds of activities, like learning a new programming language, start training for a marathon or starting a new app project. At this stage it’s not really difficult to do a lot.

But then at some point the motivation will be become less. At this point most people stop and start to look into another thing. So for example, if you are starting a blog, then you will have a lot of blog posts in the first few weeks, but then the post frequency will drop and you will think “Well, I’m not so motivated anymore, so probably I should do something different…”. That is a big mistake!!! Because after starting a new thing, the same thing will happen again. By the way, that’s one of the reasons why most people don’t specialise into something although that’s a very important thing. Take a look at one of my blog post if you want to know more about specialising.

In this picture you can see this pattern: 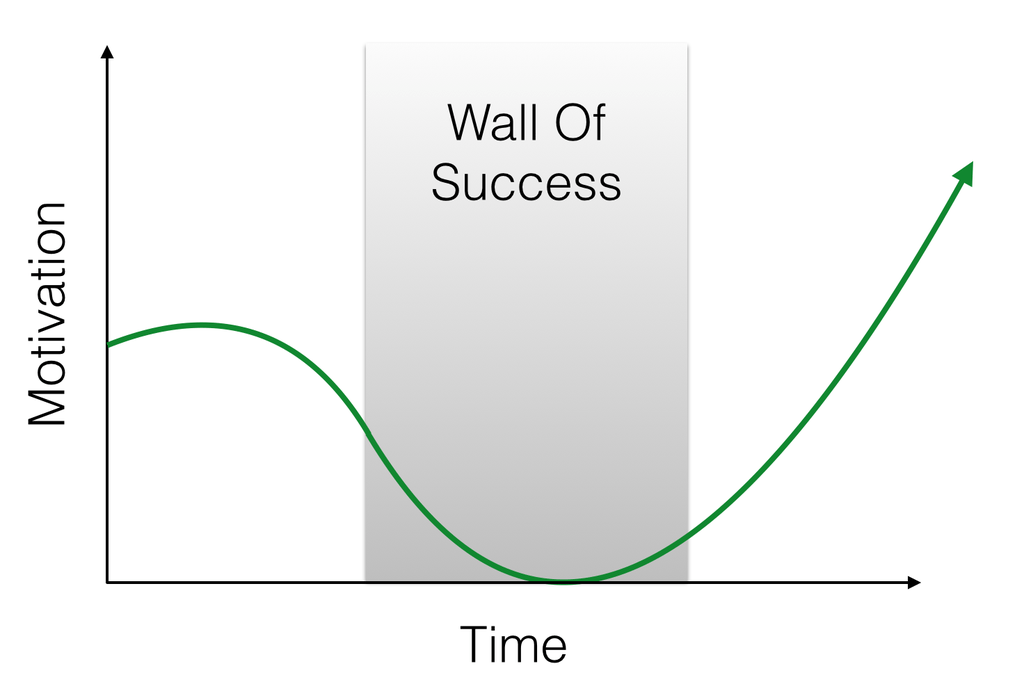 So, what’s the right thing to do at this point? You should just carry on! Don’t quit! And then, after some time, the motivation will come back and be even higher than before because you see that it’s worth the effort. And the real success comes after that wall.

So far I’ve spoken about the first time. But you will face this situation again and agin. So it’s not enough to push through the wall of success just once, but you have to do it again and agin. That’s the big secret. More over, the same pattern arises in sub tasks as well. So for example you want do develop an algorithm, which takes about two days. You will start highly motivated but after a few hours the motivation will drop. Then you have to push through it.

What you shouldn’t do

As I said before, it’s not a good idea to quit the whole thing when you are not so motivated any more. But there’s another thing you shouldn’t do as well: Taking a break or do less. Of course you should take a break when you’ve worked long hours. But when you are just facing the wall of success, then you shouldn’t go on vacation because after coming back nothing will be different.